Despite some important examples of struggles in this country in response to the effects of the economic crisis, it is the capitalist who have carried out a consistent offensive.

The devastation from unemployment is the worst since the 1930s, and the real percentage of which is above 16%, with over 20% in some areas. But the recession isn’t effecting all people the same way. Black and Latino unemployment is nearly double that of whites. One of the reasons is that the recession isn’t just attacking skilled labor, which is more white, but it’s blitzing unskilled labor. As more skilled labor takes up unskilled jobs to pay the bills this adds to the effect.

After the mini-recession of 2000-2001 there was a jobless recovery. But Black people saw faster rates of unemployment after the relative “boom” time of the 1990s at the same time the class divide in Black communities has expanded. But even considering that, in historical perspective black male unemployment has officially shifted between 15 and 10 percent from the 1980s and 1990s.

Dedrick Muhammad spoke recently on Democracy Now about this, touching on Black unemployment and Latino unemployment as well as the role of predatory lending by the banks that has lead to a loss of 70-90 billion dollars in home-value wealth for Black and Latino people.

Although we should realize they are talking about the working class and not the middle class, in the following article, taken from the Institute for Policy Studies, Barbara Ehrenreich and Dedrick Muhammad address some of the details.

The Destruction of the Black Middle Class

By Barbara Ehrenreich and Dedrick Muhammad

To judge from most of the commentary on the Gates-Crowley affair, you would think that a “black elite” has gotten dangerously out of hand. First Gates (Cambridge, Yale, Harvard) showed insufficient deference to Crowley, then Obama (Occidental, Harvard) piled on to accuse the police of having acted “stupidly.” Was this “the end of white America” which the Atlantic had warned of in its January/February cover story? Or had the injuries of class — working class in Crowley’s case — finally trumped the grievances of race?

Left out of the ensuing tangle of commentary on race and class has been the increasing impoverishment — or, we should say, re-impoverishment — of African Americans as a group. In fact, the most salient and lasting effect of the current recession may turn out to be the decimation of the black middle class. According to a study by Demos and the Institute for Assets and Social Policy, 33% of the black middle class was already in danger of falling out of the middle class at the start of the recession. Gates and Obama, along with Oprah and Cosby, will no doubt remain in place, but millions of the black equivalents of Officer Crowley — from factory workers to bank tellers and white collar managers — are sliding down toward destitution.

For African Americans — and to a large extent, Latinos — the recession is over. It occurred between 2000 and 2007, as black employment decreased by 2.4% and incomes declined by 2.9%. During the seven-year long black recession, one-third of black children lived in poverty, and black unemployment — even among college graduates — consistently ran at about twice the level of white unemployment. That was the black recession. What’s happening now is a depression.

Black unemployment is now at 14.7%, compared to 8.7% for whites. In New York City, black unemployment has been rising four times as fast as that of whites. Lawrence Mishel, president of the Economic Policy Institute, estimates that 40% of African Americans will have experienced unemployment or underemployment by 2010, and this will increase child poverty from one-third of African-American children to slightly over half. No one can entirely explain the extraordinary rate of job loss among African Americans, though factors may include the relative concentration of blacks in the hard-hit retail and manufacturing sectors, as well as the lesser seniority of blacks in better-paying white-collar positions.

But one thing is certain: The longstanding racial “wealth gap” makes African Americans particularly vulnerable to poverty when job loss strikes. In 1998, the net worth of white households, on average, was $100,700 higher than that of African Americans. By 2007, this gap had increased to $142,600. The Survey of Consumer Finances, which is supported by the Federal Reserve Board, collects this data every three years — and every time it has been collected, the racial wealth gap has widened. To put it another way: In 2004, for every dollar of wealth held by the typical white family, the African-American family had only 12 cents. In 2007, it had exactly a dime. So when an African American breadwinner loses a job, there are usually no savings to fall back on, no well-heeled parents to hit up, no retirement accounts to raid.

All this comes on top of the highly racially skewed subprime mortgage calamity. After decades of being denied mortgages on racial grounds, African Americans made a tempting market for bubble-crazed lenders like Countrywide, with the result that high income blacks were almost twice as likely as low income white to receive high interest subprime loans. According to the Center for Responsible Lending, Latinos will end up losing between $75 billion and $98 billion in home-value wealth from subprime loans, while blacks will lose between $71 billion and $92 billion. United for a Fair Economy has called this family net-worth catastrophe the “greatest loss of wealth for people of color in modern U.S. history.”

Yet in the depths of this African-American depression, some commentators, black as well as white, are still obsessing about the supposed cultural deficiencies of the black community. In a December op-ed in the Washington Post, Kay Hymowitz blamed black economic woes on the fact that 70% of black children are born to single mothers, not noticing that the white two-parent family has actually declined at a faster rate than the black two-parent family. The share of black children living in a single parent home increased by 155% between 1960 and 2006, while the share of white children living in single parent homes increased by a staggering 229%.
Just last month on NPR, commentator Juan Williams dismissed the NAACP by saying that more up-to-date and relevant groups focus on “people who have taken advantage of integration and opportunities for education, employment, versus those who seem caught in generational cycles of poverty,” which he went on to characterize by drug use and crime. The fact that there is an ongoing recession disproportionately affecting the African American middle class — and brought on by Wall Street greed rather than “ghetto” values — seems to have eluded him.

We don’t need any more moralizing or glib analyses of class and race that could have just as well been made in the 70s. The recession is changing everything. It’s redrawing the class contours of America in ways that will leave us more polarized than ever, and, yes, profoundly hurting the erstwhile white middle and working classes. But the depression being experienced by people of color threatens to do something on an entirely different scale, and that is to eliminate the black middle class.

on the ground in Arizona 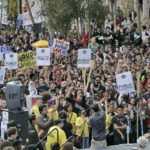 3 thoughts on “Not a Recession, but a Depression for Black workers”