This summer, Pakistan’s supreme court ruled that hijras, a name for South Asia’s historic transgender community, will be registered by the state, ostensibly to provide social services and prevent police brutality.

This article from The Guardian written by Basim Usmani indicates that, though the ruling has been lauded by official media and Pakistan’s middle classes, both the motivations and the effects of the ruling are less than liberating for queer people in Pakistan. For one, the judiciary might have been motivated by the desire to target Pakistan’s police, with whom they have a less than friendly relationship, and who is known to frequently crack down on communities of hijras in Pakistan. Another motivation may have been to not allow India to one up Pakistan with their recent ruling that decriminalizes queer sexuality.

Usmani also points out that the ruling is likely to be extremely ineffective in practice, given the history of the Pakistani government’s bureaucracy. More importantly, though, the ruling is certainly not a sign that gender norms are changing in Pakistan.

Others writing on the ruling recognize this last point. SherryX makes this comment on her blog.

“All these [moves towards reform by the judiciary] show a paradigm shift in the character of SC [Supreme Court], from judicial activism its moving towards Judicial populism and in the longer run trying to take the position which Pakistan Army enjoys in relation to the weak political dispensation. Whilst the English speaking elites have hailed the decision about the Hijras as some great civil right victory, freethinker elaborates what does it means for the LGBT community of Pakistan, for it means nothing.”

This following article by freethinker frames an important critique: “Gender injustice is a site of revolutionary potential, and that can be lost with the State apparatus formally committed to the ’social uplift’ of the hijra.”

However, freethinker does dangerously flirt with the idea of a “traditional” past as more liberating for queers than modernity. I don’t believe that queer folks should be forced to choose between the patriarchy and heterosexism of the middle classes or the “traditionally minded” forces in society.

freethinker’s last paragraph does sum up succinctly the problems with the ruling. One, it represents a cooptation of the queer movement in Pakistan. Two, it shifts the onus for poverty and forced prostitution on transpeople in Pakistan and not on capitalist society. Three, everyday people have been accustomed to recognizing the self-activity of transpeople in direct conflict with the state. Now, their gender expression is sanctioned by the state.

Usmani does mention, however, that a protest in support of trans rights was held recently in Lahore. There is a certain level of activity among Pakistan’s trans communities that the judiciary and other politicians will have to respond to. In the case of a from below struggle for recognition, this sort of change could and should be seen as a victory. The possibility that Pakistan was responding to India’s recognition of queer rights demonstrates that pressure from below may have indeed led to the ruling, albeit in a indirect fashion. 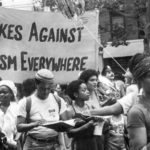 I Am a Woman and a Human: A Marxist-Feminist Critique of Intersectionality Theory

3 thoughts on “Queer Liberation and the Pakistani State”