This has been a huge couple of weeks for developments regarding Iran.  While Gathering Forces has not had a chance to discuss the massive protests which erupted in Iran over the summer, the urgency of what has taken place with Iran declaring basic civilian nuclear capabilities, Israel hawkish stance towards Iran, and Obama’s multi-lateralism put on trial raises important questions of where US Empire is headed and the general fate of the Middle East.

I will lay out a few concerns or points which I think every anti-imperialist has to take up.

1. What is Israel’s role in all of this? Netanyahu’s government is hawkish as ever, begging for an airstrike on Iran.  Only the US could give the green light for Israeli jets to fly over Iraqi airspace so this could happen. How does Israel’s foreign policy interests relate to US Empire in this case? What discussions happened between Obama and Netanyahu when the latter visited the White House?

2. It looks like Obama has won an important tactical victory. His multi-lateralist imperialism is in the driver’s seat.  But what will happen if it fails in a few months. Could his tactical victory be turned into a defeat by the Neo-cons and hawks in the US foreign policy establishment.  Could they turn around and say “See you negotiated with a terrorist, fascist etc and now that has failed leaving only one option: airstrikes on Iran.” Also, how serious are Russia and China in putting serious sanctions on Iran considering their economic ties?

3. I do not believe an attack on Iran is good for US Empire at this point. US Empire does not have the international political chips. The US Imperialists also have to be worried about how this situation could effect Iraq and Afghanistan as well leading to serious destabilization of both considering Iran’s role in the two countries. This leads to the US arguably does not have the dollars or boots to sustain a third front if things spiral out of control. So a rational and realist approach to Iran, in my take, has to lead to excluding an airstrike from Iran.

At the same time, Empire is not run just on rational policy choices. The policy which stems from the US government is a reflection of competing interests as we see with the build up of the Iraq war in 2003. Could we see a similar scenario with Iran where sectional interests over-ride the realist/ rational prerogatives of American Empire?

4. I definitely do not want to be an alarmist about all of this. The best way I think one can think about this situation is to put it in historical contexts. The threat of attacking Iran has been put on the plate before when Israel asked Bush in 2008 if they could get fly over rights over Iraq. The current situation in my mind, is comparable to that moment, although there certainly different subjective factors which are different such as Obama being in the White House, Netanyahu for another to name some of the most critical.

5. The bourgeois press is running the full offensive against Iran reminding me of the Iraq war buildup. Everyday the NYTimes is running articles referencing anonymous sources, classified documents etc claiming the danger of Iran’s nuclear threat. It is almost as if they learned nothing from a disaster just a few years ago. But the subtle drum beat is definitely there, although not yet comparable to what it was with Iraq.

6. My last and final point for now is what relationship does Ahmadinejad’s foreign policy have to do with demonstrations like this? Also, are there tensions in the Iranian state over this issue as there was over the protests and elections over the summer? You can also check out the developing movement to free political prisoners in Iran here. 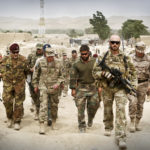