The following are a few basic and rough notes on the League of Revolutionary Black Workers. For the purposes of this post they are mainly based on “Dying from the Inside: The Decline of the League of Revolutionary Black Workers” by Ernie Allen, a key account of the organizational issues of the LRBW. These aren’t exhaustive notes, since it is possible and necessary to dig much deeper into the issues raised by the LRBW. Instead, they represent some basic starting points for a more thorough discussion of one of the most important groups and experiences of the Black Power and New Left period.

1. To understand the origins of the LRBW we have to grasp two interrelated issues. First, is the particular place and experience of black workers in the United States. Second, is the history of the United Auto Workers as it developed out of the mass CIO labor movement of the 1930s. Specifically, we have to look at the formation of an industrial union bureaucracy with its integration into capitalist production.

2. We need to understand the historical relationship between black labor and the apartheid system that has controlled it This system has deep roots in the stages of development of American capitalism. First as a source of the super-profits of enslaved labor extracted under a regime of racial terror. Second, as a debt-bonded peasantry that boosted falling profit rates of Southern agriculture and commodities under a racial caste system of Jim Crow segregation. Third, migration to the north to become industrial workers at the heart of American capitalism, but relegated to the lowest-tiered jobs and wages, generally excluded from production and skilled work until WW2, and subject to an elaborate system of discrimination and segregation to enforce this closed, racially-based labor market.

3. The role of the UAW bureaucracy was double-sided. One one side it helped subordinate workers to the assembly line by channeling grievances into periodic negotiations for the contract, thereby maintaining capitalist control over the day-to-day functioning of the factory. The other side of this role in controlling workers was enforcing the racial division of labor that not only facilitated job competition between black and white workers, but ensured that the status of black workers remain largely unchanged. Therefore the ways in which the bureaucracy functioned as an extension of capitalist power overlapped with its role as a white labor patronage network.

4. Attempts were made by black workers, with contradictory success, to build an alternative patronage structure that would uneasily be integrated into the New Deal labor-liberal coalition and protect against white hate strikes and violence. This began most visibly with A. Philip Randolph’s march on Washington in 1941 for wartime production jobs and continued with the Trade Union Leadership Conference, a black caucus in the UAW, that sought to breakdown discriminatory barriers to upgrading black labor.

5. Black workers had greater access to production jobs into the 1960s at the same time when the auto industry, facing declining profits, instituted speed up of the assembly line, growing disinvestment in the factories, lay-offs and falling wages.

6. In 1967 black people attempted an insurrection in Detroit. In 1968 a massive wildcat strike of majority young black workers shut down the Dodge Main assembly plant over work conditions. There was continuity between the two events. The experience and struggle against the racial system of oppression in the community spilled over and logically linked the experience and struggle against exploitation in the factory. The LRBW attempted to formalize this relationship by giving it organizational form and situating it in a wider political framework which black people of Detroit and around the country had concretely experienced and understood: the racial system that had always governed the specific exploitation of black workers and that had led, at different points of development, to increased profits for capitalism.

7. By focusing on the direct action in the factories of younger black workers, the LRBW represented a break with the loyal oppositionism of the older black worker politics in union caucusing and the liberal-labor coalition. DRUM activity set itself in direct opposition to the union reform United National Caucus inside the UAW led by Pete Kelly, a white man, and Jordan Sims, a black man.

8. While DRUM failed (refused) to lead advanced white workers in the strike movement, no similarly organized white workers emerged to challenge the relationship of the class nature of the union bureaucracy, speed-up, and disinvestment (and later de-industrialization) to the system of white supremacy. This two-sided problem has led to a prolonged period of reaction in which falling living standards, deindustrialization, disinvestment in social infrastructure was justified as a consequence of black workers demands, immigrant workers, other nations and, finally, the whole of the working class itself.

9. As other RUMs spread to more factories with the successful DRUM wildcat strike, the LRBW was formed by a group of radicals who had worked together on several projects, including the Freedom Now Party and the paper Inner City Voice, and with important individuals of the Detroit radical left, including Grace Lee, James Boggs and Martin Glaberman, as well as Milton Henry, a founder of the Republic of New Africa. Therefore an upsurge in mass activity fused with experienced revolutionaries. These revolutionaries were attempting to work out an approach to the racialized nature of capitalism and the deep racialized divisions in the American working classes. By trying to integrate black nationalism and class struggle at the point of production they were working out the relationship between the paramount struggle against white supremacy to the idea of workers control as the negation of capitalism.

10. The LRBW expanded into community organizing, particularly around education, other industries, including hospitals, created its own media, established the framework for a national formation called the Black Workers Congress, had a security wing, acted as a social center, opened several offices, had thousands of supporters and hundreds of organizers. Its core organizers were around 50-60 people.

11. The formation of the LRBW was in response to particular problems facing the upsurge. By 1969 the RUMs were “declining in influence” what were “fortunate to pull out a handful” of people to meetings, whereas in 1968 these meetings could “attract hundreds”. “The wave of popular discontent unleashed in the 1967 rebellion–upon which the Revolutionary Union Movement had built itself–had now subsided. It might be more accurate to say that it had been engulfed by increasingly violent gang activity and street crime” (77). Within the plants, RUM organizers were the victims of constant firings and intimidation, while printers would not print the Inner City Voice. The LRBW was meant to consolidate the gains of 1968 and centralize activity in order to overcome these difficulties.

12. The deep organizational problems of the LRBW, however, didn’t alleviate these problems, but instead distracted from them. These had several features.

13. An unintended consequence was that in-plant organizing slowly began to lose its central place in the LRBW. As a result, the original base and membership of the group–workers in the auto plants–began to drift away while more middle class people entered the new projects, especially as their technical knowledge was useful in many of the new areas of work. The consolidation and strengthening of the RUM formations suffered from lack of attention. “The League did not succeed in confronting the problems of declining mass revolutionary sentiment”; instead these “political failures were masked by a false sense of organizational successes in other areas” (78). The question of how to understand and integrate insurgent activity with the methods of protracted struggle was never solved. Was the LRBW a mass or revolutionary organization? Or both? What was the relationship between the two?

14. These issues were not addressed in any programmatic way and instead became a major source of division in the leadership of the LRBW. This division indicated a lack of political and strategic unity among the leadership that suggested only a loose association prior to the formation of the group. The influx of money from the James Forman-led Black Economic Development Conference tended to aggravate this problem by enabling an autonomy to the factions within the leadership that otherwise wouldn’t have existed. This was an obstacle to coming together to fix the internal problems of the group.

15. The leadership of the LRBW was not simply divided over emphasis on nationalism or class struggle, but how these ideological positions manifested themselves in specific orientations. General Baker and Chuck Wooten were in-plant organizers, while others spent considerable time on other projects connected to the League and interacting with the white (and predominately middle class) Left. This was rooted in different strategic conceptions of how to strengthen and expand the work. One side argued that a quick expansion of activity was necessary, while another felt that there needed to be more “coordinated expansion” along with “consolidation of existing organizational ventures”, and still another wanted little to do with anything outside of organizing with black workers in the plants.

16. Women were used as political footballs in the factional, political and organizational struggles inside the group. Patriarchy mediated many of the political and organizational problems of the LRBW and subordinated women around them. While relationships with white women among some in the leadership was the basis of criticism among the rank-and-file, black women, unlike men, were often prevented from having relationships outside the organization because they were said to be a “security risk” (86).

17. Allen points out that there was not enough time spent on the development and support of the organization and its members. Behind this was the idea that these issues just “take care of themselves” and are not a central component of organizing as well as building a group.

18. The leadership, represented in the Executive Board, “conducted itself almost as an autonomous organization”. The increased scope of the organizing led to a “lack of visible or responsive leadership” (88). The leadership of the LRBW did not pay attention enough to the organizational question. This led to lack of political mentorship of newer members and the rank-and-file that reproduced not only ideological uneveness, but lack of guidance on methods of work and organizing. They did little to support and train new layers of leadership which was summed up in the struggle between the Central Staff and the Executive Board. That the leadership tolerated “extremely lax organizational discipline” was the other side of the fact that they had no notion of “strengths and weaknesses of individual rank-and-file members” (87). Finally, the leadership had difficulties in breaking down political education into terms that workers without extended learning could understand. These factors took on a structural form in the group where there were no vehicles for or commitment to consistent political discussion and self-reflective discussion on the group’s work and development among the leadership and among the group as a whole.

19. Ultimately, Allen points to an important objective basis for the internal problems of the LRBW: “In the absence of a strong and independent workers’ movement, however–as our own New Left experience clearly demonstrated–self-anointed ‘vanguards’ have a tendency to degenerate into highly centralized, bureaucratic, sectarian organizations” (p. 108-109). Further, the RUMs and the LRBW came face to face with an important problem: how to base itself on direct action and insurgent struggle without losing touch with the capacity of the workers to struggle and, at the same time, not be recuperated into the logic of the liberal-labor coalition where labor and racial peace are principles rather than tactical truces?

Hands Up, Turn Up: August 20th National Day of Action 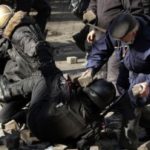 6 thoughts on “Lessons from the League of Revolutionary Black Workers”