Bob Meister, They Pledged Your Tuition 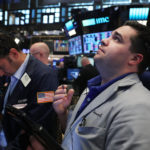 The Economic Crisis and Talk of Recovery

8 thoughts on “New Student Occupations in California: Which Way Forward?”