Two of our members, Enzo and Eve, were interviewed on the communist cinematic analysis Podcast, Hammer & Camera, based on their article, “Black on Both Sides: Grappling with BLM in Movies” Check out the Podcast below!

“There are so many more Troy Davis'” 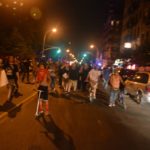